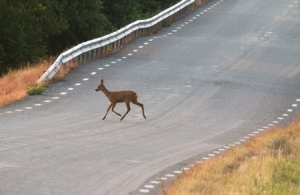 Minnesota ranks in the Top 10 in the nation in terms of the number of annual car accidents between a driver and a deer, so it’s no surprise that we see an uptick in deer-related maintenance requests as hunting season approaches.

Minnesota drivers have the eighth highest odds of striking a deer with their vehicle, as State Farm suggests that 1-in-88 Minnesotans will hit a deer this year. In all, State Farm projects there will be 37,549 accidents involving deer on Minnesota roads in 2014.

While Minnesotans can be thankful they don’t live in West Virginia – where an estimated 1-in-39 drivers will collide with a deer this year – the fact that nearly 40,000 individuals will hit a deer can be unsettling to many drivers. It should be noted that deer-related accidents are expected to fall from last year when Minnesota had the sixth highest odds. Officials believe the extremely cold winter and greater hunting license applications will lead to less car accidents caused by deer this year.

Wisconsin, our neighbor to the East, comes in just ahead of Minnesota on the list, with 1-in-85 odds of striking a deer in America’s Dairyland. Drivers in Minnesota and Wisconsin are more than twice as likely to hit a deer than the national average, which is projected at 1-in-169.

Not surprisingly, residents in Hawaii are at the lowest risk for hitting a deer with their car. Only one in 10,281 Hawaiian drivers will file a claim because of a deer this year.

“Whether you live in Pennsylvania or Hawaii, it’s important that drivers are practicing safe driving habits and watching out for animals on the road,” added Avery.