The Worst States For Speeders 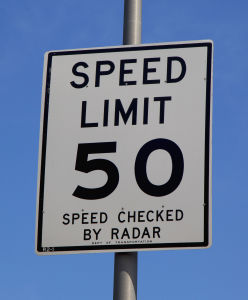 Let’s be honest, car ownership can be expensive. Regular scheduled maintenance isn’t usually too bad, but you also have to factors in other expenses like car insurance and driving citations. Even the best drivers have seen the flashing blue and red cherries in their rearview mirrors before, so today we’re looking at the worst and best states for speeding tickets.

5. California – On the outset, California doesn’t look so bad. The base fine for speeding between 1-15 mph over the limit is $35, but then they tack on administrative and processing fees. By the end of it, you’re holding a $158 ticket. Additionally, a speeding ticket can jack up your insurance rates. One research group suggests the higher insurance rates will amount to 20 times the price of the ticket in the long run in California.

4. New York –  New York is exceptionally hard on excessive speeders. Anyone caught going at least 30 miles over the posted speed limit will be hit with a $600 fine and 30 days in jail.

3. Virginia – Similar to New York, Virginia is also very harsh on excessive speeders. Anyone caught going faster than 80 mph or at least 20 miles over the posted speed limit can be hit with a Reckless Driving ticket, which is punishable by up to a year in jail and $2,500 in fines. The state also ranks seventh in the nation for most tickets issued each year.

2. Massachusetts – Massachusetts has a tiered system in which the ticket price increase rapidly depending on how many miles you were driving above the speed limit. The base fee is $50, but it increases by $10 for every mph you drive about the speed limit, which means you’ll be paying at least $200 for doing 70 mph in a 55 mph zone. Additionally, speeding in a tunnel is a serious fine in Massachusetts. Tunnel speedsters will be hit with a $500 fine, and the state boasts the the second highest speed-trap-to-mile ratio in the nation.

1. New Jersey – Let’s just say you do not want to get caught speeding in New Jersey. Not only will ticket fines double if you’re traveling more than 9 mph faster than the posted 65 mph speed limit, but you have to look out for speed traps at nearly every turn. New Jersey boasts one speed trap every 30 miles, which is the highest mark in the US, and they collect nearly $30,000 per mile in driver fines and fees.

On the flip side of the ball, here are the five most lenient states when it comes to speeders.

4. Tennessee – The maximum speed limit fine is only $50, so long as you aren’t drag racing.

3. Idaho – Idaho doesn’t have very many speed traps, and getting caught going up to 15 mph over the speed limit will only set you back $75, which is less than half what the same violation would cost in Massachusetts.