As we noted last week, potholes can cause major damage to your car. Now that temperatures are on the rise, you’ve no doubt encountered a swarm of potholes during one of your commutes. Hopefully you’ve been able to avoid the big potholes, but that wasn’t the case for one Minnesotan whose airbags deployed when he ran over a rather nasty pothole. 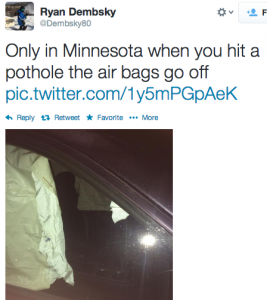 Like we said, we’re more than happy to help you fix any issues that may arise from hitting a pothole: Alignment, damaged tires, broken bearings, handing issues, etc. Although we can fix your car, we can’t fix the pothole that dinged your car in the first place. If you want to let the city know about a dangerous pothole, here’s what you need to do.

Calling In a Pothole

Since MnDOT only fixes potholes on interstates and state highways, you’ll have to go through a slightly different reporting process if the pothole is on a less-trafficked street. The Transportation Department asks citizens to report these potholes to the county or city where the pothole is located. Just remember that your submission is considered public information, so don’t say anything that you wouldn’t be comfortable seeing in print if it got picked up by a news station.

If your car is making a funny noise after hitting a pothole, or if it doesn’t seem to be working correctly, give us a call. We’ve fixed many different problems caused by potholes, so let our trained technicians take a look at your car. We’ll have your car running smoothly in no time.