Engineers are constantly looking for new ways to improve upon current technology, and one of the most studied components of automotive engineering is the development of the optimal tire. While some are radically attempting to reinvent the wheel, others are simply trying to improve upon the current model. Below, we look at some of the emerging trends in the tire industry.

One way scientists have tried to improve tire technology is by experimenting with what goes inside the tire. Compressed air is often viewed as the norm, but more and more people are choosing to fill their tires with nitrogen. Although compressed oxygen is made up of 78 percent nitrogen, switching to a purer component has many benefits. By filing your tires with a pure nitrogen compound, your tires will:

As you might expect, filing your tires with nitrogen will be more expensive than compressed air. Not all shops have the equipment to remove the air from your tires and fill them with nitrogen, and the shops that do usually charge at least $100 for the swap. 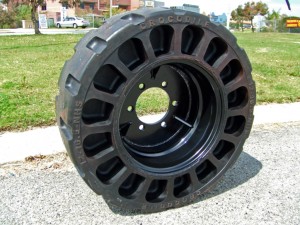 Another revolutionary development in the tire industry is the airless tire. Airless tires have already been implemented on some specialty vehicles, like golf carts, riding lawn mowers and heavy construction equipment, but they aren’t very common in the automobile industry.

Even though they may be the way of the future, there are still plenty of faults with the current airless tire model. The first issue is that the tire doesn’t operate well at high speeds. The Tweel Airless Tire, the brainchild of the engineers at Michelin, constantly vibrates at speeds above 50 mph. The tires also give off a considerable amount of noise at that speed, which makes for an annoying drive.

The last issue with the airless tire is that it deviates from the norm. All innovation must inherently differentiate from the standard vision, but the problem for auto engineers is how to manufacture and develop large quantities of airless tires at a low cost. The first pneumatic (compressed air) tire was first developed in 1887, so engineers have been perfecting the science for over 125 years. Until the issue with airless tires can be resolved, auto manufacturers and buyers will continue to turn to cheaper and readily available pneumatic tires.

If you want the best option on tires in the Twin Cities, look no further than Affordable Auto. Give us a call or stop on in today!