Should I Warm Up My Car When It’s Cold Out? 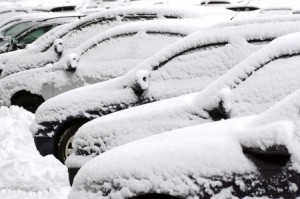 The temperatures are slated to drop significantly over the next few days, but that doesn’t mean everyone can just curl up with a blanket until spring returns. People still have to get to work or the grocery store, and many times they’ll start their car and let it run for a few minutes before driving off. Today, we’ll explain if it’s really a good idea to let your car warm up when it’s cold out.

Before we answer the question, let’s begin by examining how a modern engine works. Many of today’s engines use an electronic fuel injection system, which helps regulate how much fuel gets into the engine depending on a variety of factors, one of which is temperature.

When the temperature is cold, the fuel injectors stay open longer to allow more fuel into the engine. This helps the engine run while it’s cold, which in turn leads to a warmer engine. Based on that alone, it might seem like a good idea to let your car run for 10 minutes before you drive off so the engine can get up to optimal temperature, but that’s not the case for a couple of reasons.

Secondly, letting your car sit in the idle position can actually do more harm than good. Your exhaust system operates by burning off unburned hydrocarbon emissions. A cold car gives off a higher percentage of unburned hydrocarbons than a warm engine, and even at the optimal temperature your catalytic converter can’t burn off all the unburned emissions. If your engine takes a long time to warm up because you only let it idle, you can end up with a plugged catalytic converter, which can lead to a slew of related problems, like decreased gas mileage, dirtier exhaust, and costly repair bills.

So what’s the best method for starting your car? There are two basic rules of thumb to follow, depending on the temperature.

If the temperature is above freezing: This is the most common case people face throughout the winter. If the temperature is above freezing, your best bet it to let your car warm up for 60-90 seconds before driving off. In the first few minutes on the road, take it easy while accelerating. Using this method, you’ll warm your engine up quicker, which helps keep your catalytic converter running smoothly, and you’ll waste less gas by not sitting idly.

If the temperature is below freezing: If temps are in the negative, or if you heading out to work in the early morning after a particularly cold night, let your car warm up a little longer. Give it 3-5 minutes to warm up, and then drive off slowly.